TDW: Blindsight by Peter Watts, er, blindsided me. I picked it up through Storybundle and had heard only good things. However, I wasn’t prepared for how enthralling it would be.

Watts is a scientist (marine biologist I believe) by trade, but is now an established science fiction author. His first series takes readers under water, but for Blindsight we are taken to space.  Our protagonist is the autistic mouthpiece for a team of super-human freaks who are led by a genetically altered vampire. I mean, if that doesn’t get you going I don’t know what will. How about the fact that this team are about to make First Contact? And trust me, things do not go well.

Both Blindsight and Echopraxia are great reads, but one thing that puzzles me is whether to classify them as hard science fiction. On the one hand you have interstellar travel, expansions on current scientific theories, and the fact that both books are actually referenced (the scientist in Watts coming out). On the other hand there are vampires, zombies and ‘soft’ science themes (philosophy, psychology and so on). It is perhaps the latter that might classify it as soft science fiction, as Blindsight explores consciousness, while Echopraxia explores free will (hint: the titles describe psychological phenomenon). But the fact that it is heavily researched and feels like a realisitc extrapolation of the present (you know, except the vampires – but you never know) gives credence to it being ‘hard’.

In the end, who cares. A good read is a good read.

I was excited for Echopraxia and got stuck in. It’s not an overly long read but it packs a lot in. It’s technically a sidequel to Blindsight and explores events on Earth as Siri, the main character from the first book, recounts First Contact. In Echopraxia, Daniel Bruks is a baseline (normal human with no upgrades, regarded as lesser) who is just quietly doing his own research in the desert. Then vampires attack, he runs to his neighbours (hivemind monks) and suddenly they are cruising in space. On board is also the Colonel, Siri’s father, who has his own goals. The main mission is to visit Icarus, the massive solar array that powers Earth, but not for a routine check-up. Something is out there, something malignant. Of course, things don’t go to plan. Or do they?

The great thing about this book is the twists. Everyone is played off against each other and it’s fascinating to see where everyone ends up in the end. There is so much symbolism (check out Watts’ AMA for answers) it’s hard to get a good grasp. This is one failing I found moreso in Echopraxia: description. There is plenty of it, and yet I never got a firm sense of place. As an SF lover I really want to know the intricacies of the spaceship that the majority of the story takes place on. The characters were also slightly annoying, in that our protagonist is baseline (or stupid, a point rammed home repeatedly) and everyone else is intelligent beyond our comprehension, which feels like a cop-out. That said, this is space horror done right. If there is one thing that Watts excel at, it’s revealing our futility in a universe that doesn’t give a damn. You must read these books.

For more information check out these links. And as a final thought on the soft vs hard aspects, even if you think having vampires automatically disqualifies it as hard SF, you’ve never seen vampires like this. 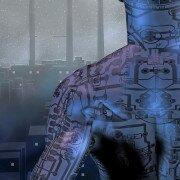 What We're Reading: Half a King (Shattered Sea #1)

What We’re Reading: The Martian
Scroll to top