There’s a lot of talk about artificial intelligence at the moment. First it was Elon Musk and Bill Gates. Then it was some researchers disagreeing with them. Then there are the bloggers talking about the researchers not being talked about. Nick Bostrom released his book Superintelligence recently, and the web is abuzz. So the release of Ex Machina seems remarkably like coincidence.

Alex Garland is a favourite writer of mine. The Beach, 28 Days Later, Sunshine, and Dredd are all highly enjoyable books/films for me. I’ll be honest straight up and say that Ex Machina doesn’t quite hit the mark like those others. That said it is still a brilliant bit of speculative fiction about what might happen in the somewhat-near future. Garland deals with the end of the world often and in many different guises. Here we witness what might be the end of the world, or the beginning of the end.

Ex Machina is about search engine CEO Nathan testing his creation Ava on hapless underling Caleb (those are all quite biblical names too). It’s a character movie and while there is a fair bit of exposition (yes they have to explain what the Turing Test is), it’s more about the Conversation Battles and the ruminations on humanity that really grab you. From the outset it’s clear that Ava, the AI made in Nathan’s personal research lab, will escape, but how and why are of more importance. And while you might cry out ‘Why is the AI a female, how sexist!’ the film is actually a good study in misogyny, and the reason why Ava is designed as a woman is succinctly explained. Put frankly, who’s going to want to interact with a grey box?

As such the character motivations are fascinating. It’s like some perverse love triangle where each player is only intent on the benefit of themselves. I found Oscar Isaac enthralling as Nathan, despite his obvious character flaws. And while half the cast is a machine, the narrative is firmly in the point of view of humanity. This is probably my main point of contention. Ava wants to be human, but would this really be the case? I want to see a movie where AI is explored meaningfully and machine characters have their own agenda, not merely trying to fit in (no, Her doesn’t count). A lot of AI stories seem to be very small scale and thus lose the chance for rich exploration (except Terminator, but that feels like it goes too far the other way). However, as a meditation on feminism, and a meditation of human nature in general, Ex Machina nails it and leaves us with a pretty damn harrowing ending.

Two things right off the bat.

First, there is a major spoiler below, so consider yourself warned. After reading Tom’s review, if you still need to be convinced to go and see Ex Machina, a score of 91% at Rotten Tomatoes and me saying ‘see it’ should be enough.

Second, I think Ex Machina is going to become one of those sci-fi films that people who aren’t immersed in spec-fic are going to tell me is one of their favourite films when we start talking about science fiction. A bit like Moon, which this film resembles in a number of respects.

Both Moon and Ex Machina are tightly constructed character-driven films, based around a single deviation from reality, in Ex Machina the creation of artificial intelligence. Both films deal with not only about what constitutes ‘life’ but also about who has the right to own other people, and whether that ownership constitutes being allowed to do pretty much anything we want with it. This is brought out through the feminist themes Tom refers to above.

Neither Ex Machina or Moon world-builds in the way that Her or A.I. do, where we are immersed in a society as well as the situation of the main characters. Both films are set in very closed environments, forcing the audience to deal directly with the ideas the main characters are psychologically struggling with.

Thematically, in terms of artificial intelligence stories, Ex Machina resembles Shelley’s Frankenstein more than any of its other peers I’ve mentioned. This is mainly due to the presence of the ‘creator’, in this case the rich and idiosyncratic coding genius Nathan, played to perfection by Oscar Isaac.

It’s Nathan’s relationship with his creation, Ava (Alicia Vikander), which is the centre of the story, rather than Caleb (Domhnall Gleeson) ‘testing’ Ava to see if she passes the Turing Test and thus whether Nathan has actually succeeded in creating ‘life.’ The Turing Test is simply the artifice of the plot.

Artificial intelligence stories often deal with the question of ‘what is human?’ but this isn’t really the focus of Ex Machina. The audience is (or should be) certain from near the beginning that Ava is conscious of her self. Although clearly not ‘human’ she is very much alive. The promotional materials for the film don’t pose the question either. Eva, despite her artificiality, has a ‘human’ personality.

The real questions in the film for me are ‘what kind of life has Nathan created?’ and ‘what will artificial intelligence be like when it happens?’ The answers to these questions are, in my opinion, quite perfect, and contain writer/director Alex Garland’s main message/theme/warning/whatever you want to call it. Unlike Tom, I regard this as the most accomplished work of Garland’s I’ve seen to date.

Creator Nathan is narcissistic, self-obsessed. He lies to, uses and manipulates people to get what he wants. He seems to have little respect or regard for anyone other than himself when it comes down to it. It should come as no surprise then that his creation turns out to be exactly the same, and that it eventually kills him.

In that sense Ex Machina is a film with a warning and a lesson. That the lives we create and move into are manifestations of who we are and what we do; that if we create our worlds for our own ends we should rightly expect our creation to turn around and destroy us.

I only recently saw Ex Machina and if you haven’t seen it yet I guess it’ll be Netflix viewing for you. Like Tom, I’m a bit of a Garland fan. During my ‘reading re-awakening’ in my mid-teens The Beach was one of the first books I chose to read outside of the high school curriculum (along with too much Chuck Palahniuk). But like Mark, I actually think this is one of his finer works. The reason I think so might be a little unfair, but I’m going to tell it to you anyway.

To my mind, the focus of most (if not all) of Garland’s writing is about exploring the dark parts of humanity – its extremes. His novel The Coma, for instance, is a chilling exploration of the subconscious. The speculative narratives he often builds around this theme are, like Mark says, the artifice of the plot. As much good science fiction does, Garland is using technological advancement and estrangement to ask questions about human nature.

The interesting dynamic in 28 Days Later, for instance, isn’t surviving rage-zombies but surviving other people. When pushed too far, the protagonist, Jim, shows a monstrous side of himself. And for me, Sunshine promised to be an advancement of this exploration into darker corners of the human mind. The set up in Sunshine was a bunch of scientists and astronauts on a mission so critical that all humanity depended on it. And in confined space, under extreme duress of circumstances, they do begin to turn on each other. Then enter a super-human monster guy to tear the place apart and things become a bit disappointing.

Ex Machina resists the urge to introduce external factors like rage-zombies or sunburnt space men, and that’s why it feels like Garland’s most cohesive effort. As Tom points out, this is a close study of 3 characters and the fact that one of them is a machine is practically irrelevant. The viewer is being Turing Tested in the same way as Caleb – we know she’s a machine but we relate to her like a person. We guess at her motives, we feel at times sympathetic and mortified by her. And we feel the same about Caleb and Nathan, too.

The moral ambiguity of each of these three characters is what I find the most fascinating element of Ex Machina. In previous works by Garland there is always a ‘good guy’ who, through extreme conditions, is tipped over the edge. And here, again, Garland sets us up. ‘Are you a good person?’ asks Eva of Caleb in one of their first interactions. And after a moment of awkwardness, he replies that yes, he is basically a good person. But by the end, whatever moral compass you thought you had in this film has probably been thrown off mark.

For me, Nathan is the most intriguing character and not just for his awesome dance moves. Nathan – the eccentric billionaire CEO – wears his manipulation practically on his shirtsleeve. Yet his actual motivations are perhaps the most obscure of all three. He’s creating an AI that he readily admits will quickly surpass humanity, leaving us behind. He sees it as inevitable even as he brings it about, yet it’s less clear that sits well with him.

And by the end the question might be, who do you sympathise with most? If it’s none of them equally, perhaps that’s a sign that Eva passes the Turing Test after all. 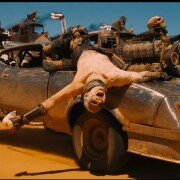 What We’re Reading: Clade and Lagoon